A freshman at Yale ask's

"Can you tell me where the library is at?"

The senior snubbed him:

"At Yale, we never end a sentence with a

" The freshman had a second go:

"Can you tell me where the library is, you cunt?"

Freshman: Brings a can

of soda into a lecture hall.

hoagie and six-pack of Budweiser into a recitation class.

to first classes of the year.

Senior: Looks forward to first beer garden of the year.

Skull and Bones, The Order, Order 322 or The Brotherhood of

Death is an undergraduate senior secret student society at Yale

University, New Haven,  Connecticut.  It is the oldest senior class

and society at Yale.

owns the society's real estate and oversees the organization. The

society is known informally as "Bones", and members are known as "Bonesmen".

Skull and Bones  was founded in 1832 after a dispute between Yale debating societies Linonia,

Brothers in Unity, and the Calliopean Society over that season's Phi Beta Kappa awards. It was

Association, incorporated in 1856 and named after the Bones co-founder. The association was

founded by  Russell and Daniel Coit Gilman,  a Skull and Bones member, and later president of

the University of California, first president of Johns Hopkins University, and the founding

president of the Carnegie Institution.

The first extended description of Skull and Bones, published in 1871 by Lyman Bagg in his book

Four Years at Yale, noted that "the mystery now attending its existence forms the one great

interest in Yale senior societies to the fact that under class men members of then freshman,

sophomore, and junior class societies returned to campus the following years and could share

information about society rituals, while graduating seniors were, with their knowledge of such, at

on the Yale campus. 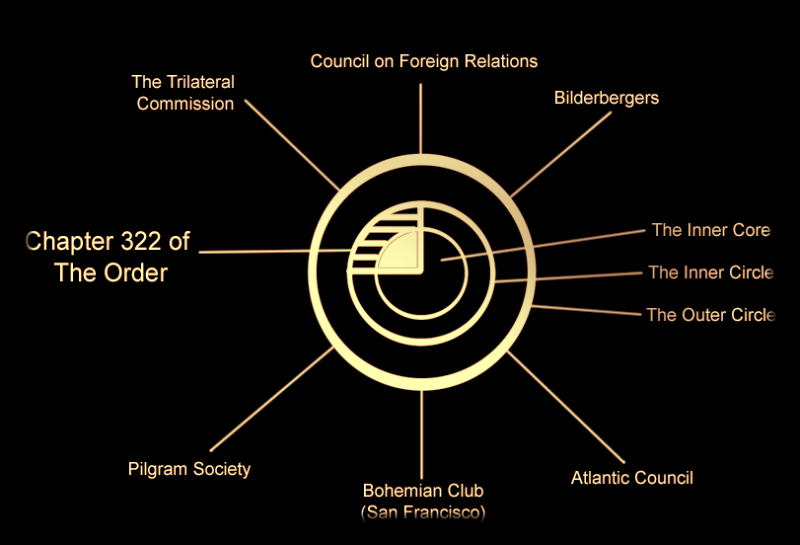 to join the society. Skull and Bones "taps" those that it views as campus leaders and other notable figures for its membership.

The Skull and Bones Hall is otherwise known as the

Gothic towers were added to the rear garden in 1912. The front

and side facades are of Portland brownstone in an Egypto-

courtyard in the rear of the building, designed by Evarts Tracy

and Edgerton Swartwout of  Tracy and Swartwout,  New York.

Evarts was not a Bonesman, but his paternal grandmother,

Evarts, were the sisters of William Maxwell Evarts, an 1837

CHAPTER 322 OF THE ILLUMINATI

of the 1970s — but its meetings and practices were. "While resourceful

researchers could assemble member data from these original sources, in 1985,

information was kept privately for over 15 years, as Sutton feared that the

photocopied pages could somehow identify the member who leaked it. He wrote

a book on the group,  America's Secret Establishment:  An Introduction to the

Order of Skull and Bones. The information was finally reformatted as an

appendix in the book Fleshing out Skull and Bones, a compilation edited by Kris

Millegan and published in 2003.

Stormtroopers and Gestapo rise to power, was the Sister Organization of the Skull

and Bones Society at Yale, which brought the same vile Nazi League Hitler

funding Bush Family to power, to both accelerate the growth of the Germanic CIA and the fast tracked Gestapo Deparment of

Homeland Security, with its SS units and FEMA Camps, ready to focus as Concentration Camps to Political order. Aided by today's technological and chemical weapons form in control or extermination. They have their own verminous Himmler combinations with Cheney and Chemical Ali Rumsfeld.

the Korean War, William B. Washburn, Governor of Massachusetts; and Henry Luce,

Smith, founder of FedEx, are all reported to be members.

2nd corps", referring to a first Corps in an unknown German university. Others suggest

Members are assigned nicknames (e.g., "Long Devil", the tallest member, and "Boaz", a

varsity football captain, or "Sherrife" prince of future).Many of the chosen names are

Lewis Lapham passed on his nickname, "Sancho Panza", to the political adviser Tex

In the 2004 U.S. Presidential election, both the Democratic and Republican nominees

were alumni. George W.Bush wrote in his autobiography, "In my senior year I joined Skull

and Bones, a secret society; so secret, I can't say anything more." When asked what it

meant that he and Bush were both  Bonesmen,  former Presidential candidate John Kerry

said, "Not much, because it's a secret."

The society's current class meets every Thursday and Sunday night during their senior year. Skull and Bones has a reputation for stealing keepsakes from other Yale societies or from campus buildings; society members reportedly call the practice "crooking" and strive to outdo each other's "crooks". The society has been accused of possessing the stolen skulls of Martin Van Buren, Geronimo, and  Pancho Villa.

The group Skull and Bones is featured in conspiracy theories, which claim that the society plays a role in a globalist/corporatist

conspiracy for world control. Theorists such as Alexandra Robbins suggest that Skull and Bones is a branch of the Illuminati, or that

Skull and Bones itself controls the Central Intelligence Agency. Books written about the society include economist Antony C. Sutton's

An Introduction to the Order of Skull & Bones and  Kris Millegan's  2003 Fleshing Out Skull and Bones.

The architectural attribution of the original hall is in dispute. The

1999 Yale campus history. Pinnell speculates that the re-use of the Davis towers

in 1911 suggests Davis's role in the original building and, conversely, Austin was

aesthetic place in relation to its neighbors, including the Yale University Art

The society owns and manages  Deer Island,  an island retreat on the St

together and rekindle old friendships." A century ago the island sported tennis

courts and its softball fields were surrounded by rhubarb plants and gooseberry bushes.  Catboats  waited on the lake. Stewards catered elegant meals. But although each new Skull and Bones member still visits Deer Island, the place leaves something to be desired. "Now it is just a bunch of burned-out stone buildings," a patriarch sighs. "It's basically ruins." Another Bones-man says that

to call the island "rustic" would be to glorify it. "It's a dump, but it's beautiful." Skull and Bones membership developed a reputation in association with the  "Power Elite".  Regarding the qualifications for membership Lanny Davis wrote in the 1968 Yale yearbook:

If the society had a good year, this is what the "ideal" group will consist of:

a football captain; a Chairman of the Yale Daily News; a conspicuous radical; a  Whiffenpoof;  a swimming captain; a notorious drunk with a 94 average; a film-maker; a political columnist; a religious group leader; a Chairman of the Lit; a foreigner; a ladies' man with two motorcycles; an ex-service man; a negro, if there

are enough to go around; a guy nobody else in the group have heard of.

Like other Yale senior societies, Skull and Bones membership was almost exclusively limited to white Protestant males for much of its history. While Yale itself had exclusionary policies directed at particular ethnic and religious groups, the senior societies were

even more exclusionary. While some Catholics were able to join such groups, Jews were more often not. Some of these excluded groups eventually entered Skull and Bones by means of sports, through the

class of 1950, who turned down the invitation for the Berzelius Society) students

to be tapped for Skull and Bones.

was opposed by Bones alumni, who dubbed them the "bad club" and quashed

their attempt. "The issue", as it came to be called by  Bones-men  was debated

year's class, causing conflict with their own alumni association,

men instead met in the Manuscript Society building.  A mail-in vote by members

decided 368-320 to permit women in the society, but a group of alumni led by

arguing that a formal change in bylaws was needed. Other alumni, such as John

Kerry and R. Inslee Clark, Jr., spoke out in favor of admitting women. The dispute

was highlighted on an editorial page of The New York Times. A second alumn

Scroll and Key member. There are overt references, especially in

and again when the society first admitted women.

In The Simpsons, the character  Montgomery Burns  attended Yale

and was a member of Skull and Bones.

In Family Guy Season 5, Episode 16 "No Chris Left Behind"

Carter Pewterschmidt  is revealed to be a member of the Society

George W. Bush arrives to dinner at Stan's home. He is distracted

by Roger and handed 2 alcoholic drinks; as Bush is portrayed as a

recovering alcoholic he then runs around town performing zany

antics and "doing the Skull and Bones", which involves a wacky dance and melody.

In the 1960s Batman episode " Fine Finny Fiends " (season 1, episode 33), during a party of Gotham City millionaires at Stately Wayne Manor, a guest references a painting of a man in a Yale sweater, to which Aunt Harriet remarks that it is Bruce Wayne's

great-grandfather, and that he founded Skull and Bones.

The society is also referenced in F. Scott Fitzgerald's  This Side of Paradise  (1920).

In the 2008 episode of Gossip Girl entitled " New Haven Can Wait ", Chuck Bass is recruited as a possible Skull and Bones prospect while visiting the Yale campus.

The Veronica Mars finale, " The Bitch is Back ", describes the founding of a college secret society by a former member of Yale's

was in the Skull and Bones!

SKULL and BONES 322 Worse than the Ku Klux Klan?

Both of the "major" 2004 presidential candidates were inducted

into one of the country's most infamous secret societies, Skull &

them ran against each other for president of the United States—

out of a population of more than 300 million people! That's quite a

Founded in 1832, The Order of Skull and Bones (formally known

as the  Brotherhood of Death ) is Yale's oldest secret society.

Headquartered in a "windowless tomb" on High Street, Skull and

Bones is only open to 15 Yale seniors, who are "tapped" to join in

the spring of their junior year.

"Those on the inside know it as The Order. Others have known it

society. More formally, for legal purposes, The Order was

whom Skull and Bones called the  goddess of eloquence,  arose to the heavens and didn't happen to come back down until 1832, when she happened to take up residence in the tomb of Skull and Bones. Now Skull and Bones does everything in deference to this goddess. They have songs or . . . sacred anthems that they sing when they are encouraged to steal things, some remarkably valuable items, supposedly, they are said to be bringing back gifts to the goddess. They begin each session in the tomb, and they meet twice weekly by unveiling a sort of a guilt shrine to Eulogia. That's the point of the society. They call themselves the Knights of Eulogia. That's where the 322 comes in."

According to rumor, initiates engage in strange bonding rituals such as lying in a coffin and reciting their sexual history in front of all the members. The object of such rituals is to create intense loyalty among members of the society. Some critics allege that these rituals contain satanic overtones. George W. Bush's grandfather, Prescott, and fellow Bonesmen reportedly robbed Geronimo's

grave and stole the  Apache chief's skull  and some of his personal effects at the Apache Indian Prisoner of War Cemetery in 1918.

Upon graduation, quite a few former  Bonesmen  use their

bonds of power and influence to make their way up through

the ranks of America's power elite, many in the area of

foreign policy. A select few Bonesmen have parlayed their

Skull and Bones connections to make a play for the White

House (believe it or not, even President William Howard Taft

was a Bonesman, as well as George H.W. Bush and his

(U.S. Senator and Secretary of the Navy), John Sherman

Cooper (U.S. Senator and member of the Warren

Alphonso Taft (Secretary of War and father of William

Skull & Bones: It's Not Just for White Dudes Anymore!

The material on this site does not necessarily reflect the views of What If? Tees.

The Images and Text are not meant to offend but to Promote Positive Open Debate and Free Speech.