at the body of a fallen comrade. 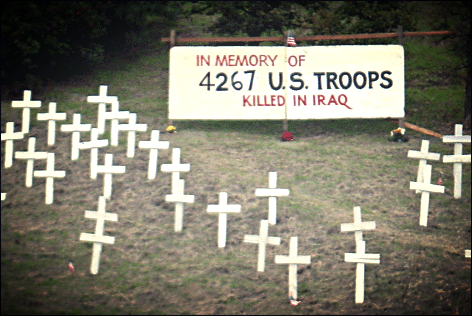 An anti war movement (also antiwar) is a social movement,

usually in opposition to a particular nation's decision to start or

carry on an armed conflict, unconditional of a maybe existing just

cause. The term can also refer to  pacifism , which is the

opposition to all use of military force during conflicts. Many

movements. Anti war activists work through protest and other

grassroots means to attempt to pressure a government

(or governments) to put an end to a particular war or conflict.

Many groups call themselves  anti war  activists though their

some anti war activists may be equally

opposed to both sides' military campaign; in contrast, many

modern activists are against only one side's campaigns (usually

the one they see as most unethical).

Pacifist and anti war movements are similar, but not the same.

Pacifism is the belief that violent conflict is never acceptable and

that society should not be ready to fight in a conflict:

movement is not necessarily opposed to  national defence .

Pacifists oppose all war, but anti-war activists may be opposed to

only a particular war or wars. The historic peace churches such

as the Brethren, the Mennonites and the  Quakers  teach that Jesus advocates non violence,

and that his followers must do likewise.

the end of the War of 1812 and the commencement of the Civil War, or what is called the

antebellum era. (A similar movement developed in England). The movement reflected both

contributed literary works against war. Other names associated with the movement include

societies were formed throughout the United States, the most prominent of which being the

were also produced. The Book of Peace, an anthology produced by the

American Peace Society  in 1845, must surely rank as one of the most remarkable works of

which would adjudicate disputes between nations. Another distinct feature of  antebellum  anti

American Civil War, where it culminated in the candidacy of George McClellan for President of

the United States as a "Peace Democrat" against incumbent President Abraham Lincoln. The

outlines of the anti war stance are seen:

the argument that the costs of maintaining the present

conflict are not worth the gains which can be made, the appeal to end the horrors of war, and

the argument that war is being waged for the profit of particular interests. During the war, the

New York Draft Riots were started as violent protests against

Abraham  Lincoln's Enrollment Act of Conscription  plan to draft men to fight in the war. The

outrage over conscription was augmented by the ability to "buy" your way out; the amount of

which could only be afforded by the wealthy. After the war, The Red Badge of Courage

described the chaos and sense of death which resulted from the changing style of combat:

from the set engagement, and towards two armies engaging in continuous battle over a wide

to join the army. He told

his girl friend that he would write every day.

After about six months,

He wrote home to his

family to find out who she married.

The family wrote back and told him.

A journalist had done a

before the Gulf War, and she noted then that

several yards behind their wives.

She approached one of

the women for an explanation.

"This is marvelous," said

the journalist. "What enabled women here to achieve this reversal of roles?"

War Is A Dick Thing,

Peace Is A Heart Thing.

Over 2,000 American soldiers have died

held at Tidworth Pennings, near Salisbury Plain. Head of the British Army Lord

The  Espionage Act of 1917  and the Sedition Act of 1918 gave the American the right to close newspapers and jailed individuals for having anti-war views. On June the 16th, 1918, Eugene V. Debs made an anti-war speech and was arrested under the Espionage Act of 1917. He was convicted, sentenced to serve ten years in prison, but President Warren G. Harding commuted his sentence on December the 25th, 1921.

an album of photographs drawn from German military and

medical archives from the first world war. In On the pain of others Sontag describes the book as 'photography as shock therapy' that was designed to 'horrify and demoralise'.

It was in the 1930s that the Western anti war movement took shape, to which the political and organisational roots of most of the existing movement can be traced. Characteristics of the anti war movement included opposition to the corporate interests perceived as benefiting from war, to the status quo which was trading the lives ( cannon fodder ) of the young for the comforts of those who are older, the concept that those who were drafted were from poor families and would be fighting a war in place of privileged individuals who were able to avoid the draft and military service, and to the lack of input in decision making that those who would die in the conflict would have in deciding to engage in it.

In 1933, the Oxford Union resolved in its Oxford Pledge, "That this House will in no circumstances fight for its King and Country."

Many war veterans, including US General Smedley Butler, spoke out against wars and war profiteering on their return to civilian life.

Veterans were still extremely cynical about the motivations for entering WWI, but many were willing to fight later in the Spanish Civil War, indicating that pacifism was not always the motivation. These trends were depicted in novels such as

All Quiet on the Western  Front  For Whom the Bell Tolls and Johnny Got His Gun.

“Those who do not learn from

history are doomed to repeat it”

Opposition to World War II was most vocal during its early period, and stronger still before it

started while  appeasement  and isolationism were considered viable diplomatic options.

Communist led organizations, including veterans of the Spanish Civil War, opposed the war

The war seemed, for a time, to set anti war movements at a distinct social disadvantage; very

few, mostly ardent pacifists, continued to argue against the war and its results at the time.

However, the  Cold War  followed with the post war realignment, and the opposition resumed.

The grim realities of modern combat, and the nature of mechanized society ensured that the

unending series of conflicts, which were fought at terrible cost to the younger generations.

Opposition to U.S. involvement in the Vietnam War began slowly and in small numbers in

demonstrations from 1967 until 1971. Counter cultural songs, organizations, plays and other

the demographically significant baby boomers. It quickly grew to include a wide and varied

cross section of Americans from all walks of life. The anti Vietnam war movement is often

considered to have been a major factor affecting America's involvement in the war itself. Many Vietnam veterans, including the late Secretary of State and former U.S. Senator John Kerry and disabled veteran Ron Kovic, spoke out against the Vietnam War on their return to the United States.

There was initially little opposition to the 2001 Afghanistan War in the United States and the United Kingdom, which was seen as a response to the September 11th, 2001, terrorist attacks and was supported by a majority of the American public. Most vocal opposition came from pacifist groups and groups promoting a leftist political agenda; in the United States, the group  A.N.S.W.E.R.

was one of the most visible organisers of anti war protests, although that group faced considerable controversy over allegations it was a front for the extremist Stalinist Workers World Party. Over time, opposition to the war in Afghanistan has grown more widespread, partly as a result of weariness with the length of the conflict, and partly as a result of a conflating of the conflict with the unpopular war in Iraq.

The anti war position gained renewed support and attention in the build up to the  2003 invasion of Iraq  by the U.S. and its allies. Millions of people staged mass protests across the world in the immediate prelude to the invasion, and demonstrations and other forms of anti war activism have continued throughout the occupation. The primary opposition within the U.S. to the continued occupation of Iraq has come from the grassroots. Opposition to the conflict, how it had been fought, and complications during the aftermath period divided public sentiment in the U.S., resulting in majority public opinion turning against the war for the first time in the spring of 2004, a turn which has held since. Anti war groups protested during the both the Democratic National Convention and 2008 Republican National Convention protests held in St. Paul, Minnesota in September 2008.

and academics such as Seymour Hersh, Scott Ritter, Joseph Cirincione and

rally "...The demonstrators, some dressed in fatigues, waved Russian flags

and many sported the black and orange St George ribbon, a symbol of victory

over Nazi Germany that pro Russian Ukrainian separatists have adopted as

Blenheim, but at a time when England was again at war with France.

experiences in the war. The work of poets including  Wilfred Owen  and

trenches and how the war was seen by the British public at the time, as well as

Remarque penned All Quiet on the Western Front, which, having been

adapted for several mediums, has become the most often cited pieces of anti

themes in his 1969 novel Slaughterhouse Five, depicting the bombing of Dresden in World

such as the Vietnam War. The American war in Iraq has also generated significant artistic

transcendent ideas, such as "God" or "Humanity", which Stirner, for example, criticized in

The Ego and Its Own (1844),a milestone of individualist anarchism. Pacifism is thus

militarism, as a specific doctrine distinguished

from pacifism, is not opposed to violence in

general, but mainly to the state's control of

control of the military, which considers that "war is the continuation of politics by other

objectives. Although Clausewitz opposed Jomini's advocacy of the autonomy of the

military institution, which became a reality with Prussian militarism and the

became the only solution available (and thus exploded in World War I), his doctrine of

limitation of military power was clearly an effort to increase the power of the state,

rather than to oppose interstate wars.

In order to facilitate organized, determined, and principled opposition to war, peace

from temporary coalitions which address one war or pending war, to more permanent

lead to large scale destructive conflicts. The overwhelming majority do so in a non

14th of June 1816. It advocated a gradual, proportionate, and simultaneous

disarmament of all nations and the principle of arbitration. The Society in London established Auxiliary Societies in various cities and towns in the United Kingdom:

for instance at Doncaster and Leeds.

Lewis Appleton organized the  International Arbitration and Peace Association  (IAPA) in 1880. Unlike the Peace Society the IAPA accepted defensive war, was not restricted to Christians and claimed to be international. It also allowed women on the executive committee. In the spring of 1882 E.M. Southey, the main founder of the Ladies Peace Association, persuaded her group to

disaffiliate from the Peace Society and move to the IAPA. The Quaker Priscilla Hannah Peckover played a central role in organizing a new ladies auxiliary of the Peace Society that was launched on the 12th of July 1882. During the 1880s the Peace Society stagnated. Its Ladies' Peace Association was much more dynamic, and claimed 9,217 members by the summer of 1885, of which 4,000 belonged to Peckover's Wisbech group. The Society's failure to condemn the outbreak of World War I in 1914 resulted in internal divisions and led to the resignation of its leader William Evans Derby. His successor, Reverend Herbert Dunnico, led the society's unsuccessful campaign for peace negotiations.

Older men declare war. But it is the youth that must fight and die. 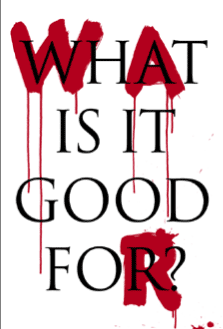 The material on this site does not necessarily reflect the views of What If? Tees.

The Images and Text are not meant to offend but to Promote Positive Open Debate and Free Speech.